When it comes to Presidential elections in the USA, I predicted in May/June 2020 unimaginable chaos (which is available in my Youtube Channel). As of today, it’s not clear in the minds of political pundits how the election results will turn out and some even doubt when the final results be announced.

The question comes is what will happen if neither party candidate won the majority or the results were not announced by 19-Jan-2021. According to US Constitution, Congress will elect the President and Senate the Vice President.

Example: In 1824, the House of Representatives elected John Quincy Adams as president.

Using Astro-databank website, I got Nancy Pelosi’s birth details (Rating: C), analyzed her Natal Chart, then superimposed with transit Planets as of 20-Jan-2021 and analyzed the possibility of her being an “Interim” President from a Astrological perspective.

Based on her Birth details, from the birth chart drawn using Sidereal Ephemeris, Cancer is the Ascendant and Natal Moon (1st house lord) is in 4th house (Libra). Debilitated Saturn & 4th house Lord Venus are residing in Aries (which is the 10th house), thus having a direct aspect on Moon. Sun is the 2nd house lord and is residing in 9th house from Ascendant (Dharma-stanam aka. House of Ethics) and is conjoined with 6th and 9th house lord Jupiter. Sun and Jupiter are conjoined with Ketu, indicating that Rahu is having a direct aspect on them. Mars the 10th house lord is in Rasi Sandhi thus it tends more to be conjoined with Saturn & Venus in 10th house (its OWN). 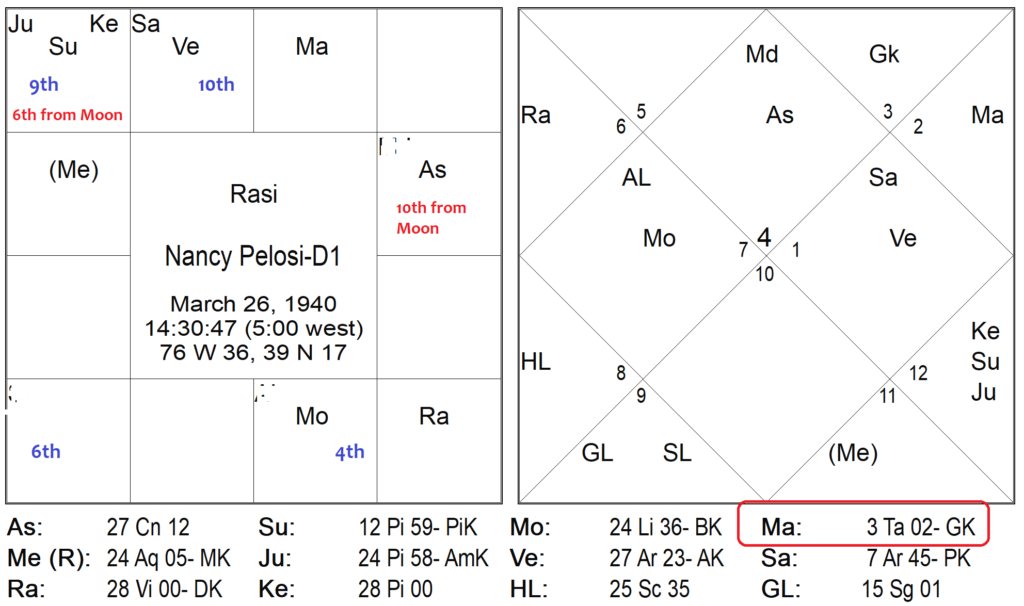 The million-dollar question is can she be the interim President?

Based on Chandra Lagna and Vimsottari Dasa if she becomes an Interim President it will last until end of Feb 2021.  So, let me go and look at the planetary position on January 20, 2021 and super impose it on her chart.

Constitutionally, on January 20th at Noon EST, the newly elected President will take an oath. If there was no candidate being officially declared by  January 19, 2021, then as per US Constitution, Congress will choose a candidate. On January 20, 2021, as per Sidereal Ephemeris, four transit Planets will be in Capricorn. Saturn, Sun, Jupiter & Mercury, while transit Mars will be in Aries (its OWN house) and transit Rahu will be in Taurus.

Like the old saying, the devil is in the details.

Finally, the planetary combination is very friendly for her to be an Interim President at least until end of February 2021, and this analysis supports my previous analysis about USA (Like 2000, Courts will “Select” the President).

Sastry Karra grew up in Hyderabad, A.P (South India). His father (Late) Karra. Venkata Rao, uncles and grandfather were all well versed in Hindu Astrology. It was his family tradition to provide predictions using Hindu Astrological principles for “Free”. At the age of 16, Sastry Karra showed interest in astrology, learnt the basic calculations and then predictions from his grandfather.